Warning : All of the linked pages in Namuwiki are written in Korean so you might not be able to read the contents. Hey, this is itself a Korean wiki, too. So what?

Namuwiki(Ko: 나무위키) is a Korean wiki website whose server is in Paraguay. It is a forked website of Rigveda Wiki and was made on April 17, 2015 because of the shut down of Rigveda wiki due to the properity privatazation of Rigveda wiki. It is an alternative wiki of Rigveda wiki along EN:Librewiki.

The authers of wiki are namu, PPPP, kasio, ztirf and syndrome.

As a forked wiki of Rigveda wiki, it contains 280 thousand articles of Rigvedawiki from the beginning, unlike EN:Librewiki. It has preserved the revisions of articles of Rigveda wiki until April 11, 2015 and offers users to edit these articles. However, it had lost some broken image and movie links, and took a lot of time to remove the vestige of Rigveda wiki propered informations. Despite these shortages, it took over the role of Rigveda wiki and Enhawiki Mirror because Rigvedawiki failed to restore from shutdown by the crisis from property privatization, and Enhawiki Mirror shut down by the conflict of Rigveda Wiki. Rigeveda wiki allowed ordinary users to edit articles on June 2015, but Namuwiki already had drawn users from Rigveda wiki. Attributing to this, it ranked the 2nd place(as the whole word) on word of the year in 2015 of Google Korea search, following MERS(메르스)..[3]

Because of its notability, ize analyized Namuwiki. The magazine explained the notability, influence, guide to use and cautions to use.

Namuwiki uses the Seed, the properity engine different from Moniwiki or Mediawiki. In Rigveda wiki, the length of title was limited due to technical problems, but Namuwiki allows to use unlimited length of title. Thanks to this, titles of articles such as this one(김수한무...), [1]and this one were gained their full names. However, some articles were broken due to lack of correspondence with Moniwiki scripts.

Unlike Rigveda wiki, the server of Namuwiki is out of Korea, which allows to avoid responsibility under the Korean Law. Rigveda wiki tried to move the server out of Korea, but it failed to move server and was under the law of Korea, which prevents making articles able to violating Korean laws like one related to politicians or sexual contents. However, many users has thought Namuwiki is not under the Korean laws because its server is not in Korea. Nevertheless, the editors of Namuwiki is under the legal regulation of Korean laws due to the nationality principle and Protection principle of Korean constitution although Namuwiki is less affected under Korean laws. Of course prosecutors cannot seize its server easily, so it is hard to investigate violations of law in wiki. In addition, a lot of morally problematic expressions, not necessarily criminal, are found in wiki

With a great surprise, Namuwiki abolished bans of creating articles after it opened a little bit later. However, it uses temporary edit blocking policy to respond to request for protection of right. The freeness of making articles allows users more convenience than Rigveda wiki, but there are some risks to make valueless articles about unfamous fries or ill-purposed propagandas. Also, even adult staffs are available in Namuwiki, so there may be concerns under the censorship of Korea Communication Commission(ko:방송통신위원회). Even though Namuwiki bypasses the packet censorship using TLS/SSL on its domain, it is not totally free on direct block of website itself.

The regulation of adult staffs on Rigveda wiki was unnecessarily strong. For example, the manager blocked a user writing just a single word "sex". Although the banning of adult staffs in Rigveda wiki was absurd, Namuwiki, however, needs to regulate sensational adult staffs. In addition, it needs self-purification against vulgar expressions, excessive verbal abuse on contrversial politicians or people or hate speeches against minorities.

During April fools day, Namuwiki changed its title skin to that of former Rigveda wiki with inserting μ's logo(the logo of Lovelive mu's) because Namu, the former chief manager, was a Loveliver.

Unlike most of Mediawiki-based wikis, Namuwiki has throught division among the positions of sysops, administrators(관리자), moderators(중재자) and tribunes(호민관), elected by users. In addition, three wiki managers(umanle, 관리자, 개발자) provides some tools for checking accounts and dealing with disclaimers to protect rights. Unlike Libre Wiki, all of the operators shares user rights such as editing fully protected articles, blocking users, changing the protection level of documents(except tribunes) and pausing/closing discussion threads. In Namuwiki, discussion pages quite different to those of Mediawiki but similar to discussion board with a lot of threads. If operators close the thread, no users can leave comments on this thread anymore.

Adminstrators(관리자) are responsible for managing boards, blocking abusing users, closing/pausing discussion threads, changing the protection level of articles and editing user pages with violation of rules. If you can read Korean, you can get informationabout administrators.

Moderators(중재자) are characteristic positions in Namuwiki, since administrators usually take responsibility on moderation of conflicts in other wikis. They have roles of moderating discussions, regulating abusing users and blinding improper talks. The number of moderators are more than that of adminstrators because there are many disputes about the expressions of writings in Namuwiki. You can see the right of moderators here.

3.1 Contests for logos, mascots and favicons[편집]

The election for temporary administrator(ko:임시관리자) started from June 5th, 2015.

As you see, all the asked users were used without login, marked as changable IP address. Initially these users tended not to be responsible to their questions, so this might be a cause for flood of weird questions.

However, some candidates answered wisely and cleverly after they asked these wierd questions.

So what... these examples might investigate not the policy of the candidates but the "level of patience"(...) By watching the situation, koreapyj, the ex-adminstrator at that time, noticed that he would block whoever ask unrelated questions for investigation, and three of users were blocked.

On this temporary administrator election, sakamoto22, youstink and PhysicalMouse was elected as new operator, and koreapyj became the supreme administrator. (but koreapyj resigned the opreator after a while...)

On October 1st, 2015, the first routine operator occured after the notice. For a near half-year after its birth, Namuwiki was operated under the temporary operators.

In the election, three administrators(ko:관리자)[6], five arbiters(ko:중재자)[7] and three tribunes(ko:호민관)[8] were planned to be elected. The vote were held from October 16th to 23th, except the vote for administrators due to the disclosing of vote records.

On October 26th, the result was reported. From November 5th, the routine operator team succeded the role of temporary operator, youstink, PhysicalMousn and Caeboo(though he elected as the first routine administrator).

During the election, the adminstrator candidate korea was blocked permanantly due to his vandals[9]. After the election, the elected candidate Freeman was lost his position and blocked permanantly due to intervention by his sockpuppets[10]. Barakumi, the successing administrator candidate after Freeman, resigned on the next day after the succession due to impeaching. Consequently, Rainy, the succeccing candidate after barakumi, elected as adminstrator. [11]

Consequently, Caeboo, Haze, Rainy was elected as administrators; iron, Orbit, VimytheCanadian, gangseo94 and Exion was elected as moderators; syndrome, Ehddiehddi and Envious was elected as tribunes. They became routine operators after the succession of authorities.

However, after just 8 days later, Orbit, one of ex-moderator, was blocked permanently because of riot of Orbit in Namuwiki(나무위키 Orbit의 난), the crisis that EVERY OPERATOR was blocked by Orbit and the emptyness of regulation occured temporarily. Afther the riot of Orbit, the moderator iron and VimytheCanadian were impeached due to tardyness of their position.

On December 21th, it is revealed that the remaining operators abused IRC chat room as means of private friendship for talking behind users' back and manipulating public opinions. As a result, all the members were lost their positions and blocked permanently except "syndrome" the tribune, who did not join the IRC chat and the first routine operator team was dispersed with a serious crisis.

During January 15 noon to Jaunary 18 noon on Korean Standard Time, preparatory election progressed. After the announcement of the result of election, the final candidate discusdion was held. The final election was between January 26 to January 29.

After voting progress was done, the newly elected candidates were announced. As they promised before, two temporary operator "twotwo2019" and "syndrome" resigned their positions. However, syndrome held the right for checkuser. Here is the list of elected candidates:

On Feb. 14 of 2016, tribune Chii resigned owing to the conflict about absolving blocked users by the quantity of contribution and his insincere attitude on participating discussions about it. [28] 10 days later, tribune ShiningDay resigned his position [29] Seongnamcitybua planned to be succeded the resigned tribune Chii's position followed by regulation of Namuwiki. However s/he was accused of his/her tweet of Twitter and left his position before he got his position on Feb. 24.[30] The remaining two position of tribune was offset by suppliment election on April 2016.

From April 24th, debates about commercialization of Namuwiki were raised. At that time, "namu" had not informed incomes and expenses of Namuwiki accounts for three months, so some of users claimed that "namu" had taken some money from the profit of advertisement. (The creative common license for Namuwiki is CC-BY-NC-SA 2.0 Korea, so the information should not be used for persuing private profit.) Actually there was no way to oversee the financial flow of Namuwiki transparently because Namuwiki itself was not under the laws. This caused some users to quit using Namuwiki. About ten daya later, namu took over his ownership to Umanle S.R.L. located in Paraguay. Some operators protested against the decision without discussing the shift of ownership of wiki and resigned their positions. Two administrators, three moderators were resigned, and the tribune admin002 was permanently blocked after his resignation because it turned out to be a sockpuppet of formerly blocked administrator's account.

The supplimentary election was held from May 19, and two administrators, three moderators and one tribune were elected and started their work from June 9th.

Namuwiki succeded the database and regulations of Rigveda Wiki and attracted almost all of users of that wiki, so it also shares the problems with Rigveda wiki. Some problems of Rigveda Wiki might be lessend such as the dictation of wiki operators or limitation of creating articles. On the other hand, some problmes are worsen, such as the overaboundance of harsh expressions and desperating debate on discussion pages. Moreover, some problems are exclusively seen in Namuwiki because of conflicts between Rigveda Wiki, abolition of article bans about political figures, adult staffs or stubs. Someone may think that the problems of Rigveda Wiki is worsen in Namuwiki

Namuwiki was born because of the Crisis of Rigveda Wiki by Privitazation of Manager and it is a forked wiki, so it has a hazard to be accused by infringement of database ownership. In addition, there are many users in Namuwiki and they tend to describe their viewpoints and ideas using a lot of debates even stronger than Rigveda Wiki, not only than Korean Wikipedia and Libre Wiki. Due to these, many troubles and accidents occurs continually. 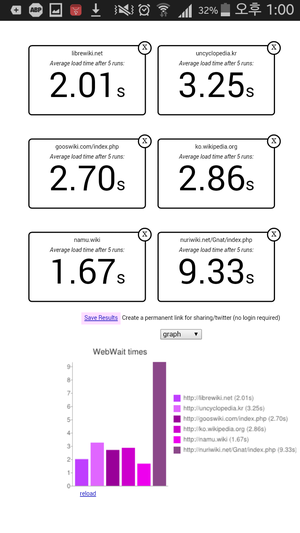